10 reasons to travel to Vietnam

1) Cruise on a traditional junk in Halong Bay

Ask anyone who’s visited Vietnam, and they’ll say one of the top reasons to travel to Vietnam is to take a cruise in Halong Bay! Aboard a traditional junk or a more modern boat with high-end comfort, the choice is yours according to your travel standards. A magical and unique place, the numerous islands and islets in Halong Bay create a spectacular seascape of limestone pillars, whose majesty earned it the UNESCO World Heritage status in 1994. According to local legend, during the time of the Jade Emperor, a dragon wagged its tail violently to protect the people from invaders, thus creating these numerous rocky peaks which arise from the sea. The permanent mist of the bay, which contributes to its charm, would also be proof of the presence of this dragon whose smoke would emanate from his nostrils.

* Located 4 hours from Hanoi by road, allow at least 2 days and 1 night for what will certainly be the highlight of your holiday to Vietnam.

North Vietnam is full of wonders. Whether you are a keen athlete or a nature enthusiast eager for authentic encounters, this is definitely the place where you should stop for at least 2 to 3 days when you travel to Vietnam.

In this region you will find many options for treks of different levels, all with the common point of being in the heart of unique panoramas. You will cross valleys with their traditional villages with authentic houses, meeting many ethnic groups on the way. Among the tribes you can meet are the famous Hmong, the Dao, the Thai, the Tay, and many others, all recognizable by their delightful traditional outfits and shimmering colours. If you wish, you can also spend a night with the locals in a homestay where you can join in family meals and try your hand at planting rice in the rice fields. The people of the North are very welcoming and will greet you with a big smile, eager to share their way of life. 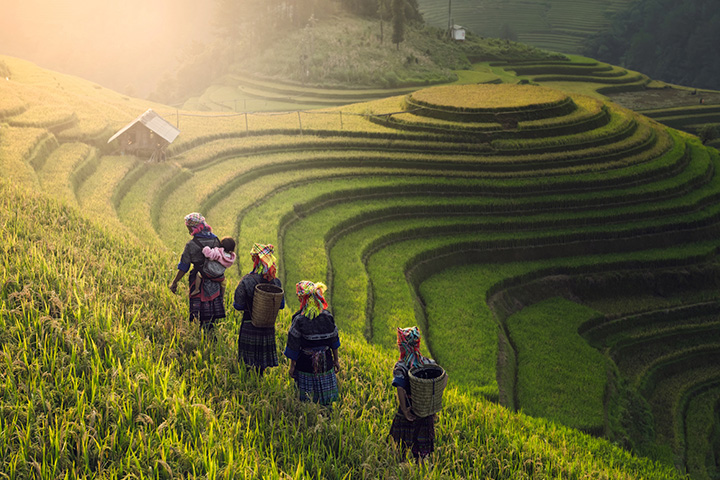 You certainly know the "pho", Vietnam's national breakfast, a dish so popular that it can be enjoyed all day. Its ingredients and unique flavours have brought it far beyond borders to be found in all Asian restaurants in Europe and other continents. But have you tasted this dish on the sidewalk, sitting on plastic stools, surrounded by locals? This experience is a must-try if you want to taste authentic “pho” at its roots and enjoy a moment in the daily life of the Vietnamese while delighting your taste buds. These beef ("pho bo") or chicken ("pho ga") rice noodles are dipped in a subtle broth of cinnamon, spring onion and star anise. Savoured in this context and cooked with the know-how of a street cook, it is the ultimate street-food and one of the top reasons to travel to Vietnam, especially if you enjoy culinary discoveries! 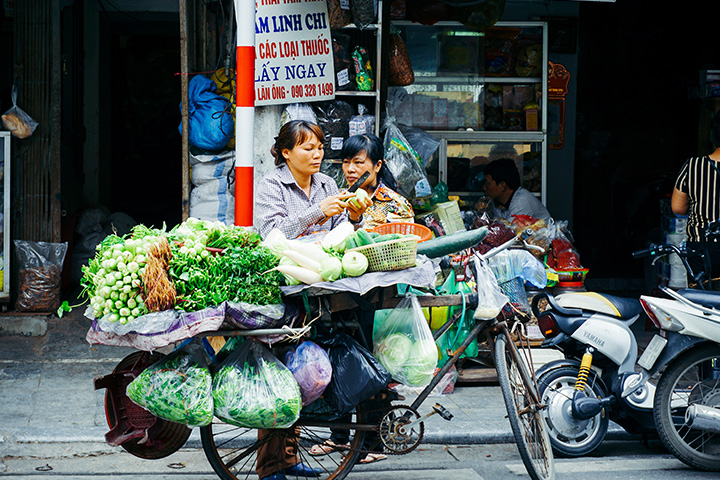 4) Travel back in time at the Imperial City of Hue

If you are hungry for history, fine dining, architecture and poetic spots, then one of the must-visit destinations when you travel to Vietnam is Hue, located in Central Vietnam. A former Imperial City, it is classified as a UNESCO World Heritage Site thanks to the wealth of its vestiges: the Imperial Citadel, the tombs of the emperors scattered along the Perfume river, the ramparts bathing in moats where lotuses and water lilies float gracefully.

The city is crossed by the Perfume River which separates the ancient city to the north from the modern city to the south, and on which it is pleasant to sail to reach the peaceful Pagoda of the Heavenly Lady. 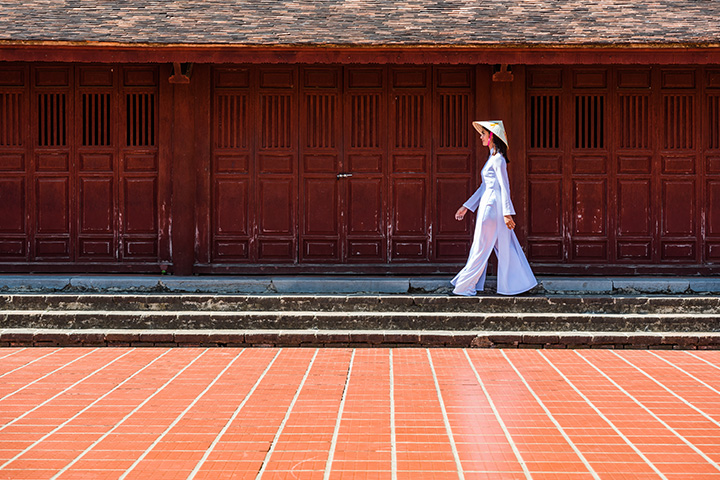 Just a 2-hour drive south of Hanoi, Ninh Binh and its surroundings constitute a stunning region which owes its charm to innumerable karst mountains which overhang the rice fields. This beautiful landscape has been nicknamed "Halong Bay on land" since its majestic formations are so similar to the reliefs that can be found in the famous Halong Bay, but instead of the sea in the background, it is rice fields whose colours change according to the seasons – one of the must-see destinations when you travel to Vietnam!

At Tam Coc, you can cruise the Ngo Dong River aboard a small sampan (traditional boat). Along impressive rocky peaks, you can explore hidden caves inhabited by many bats and find secret corners. Sometimes you will even have to lower your head to get through because the water level can be so high that the entrance is only a small gap. 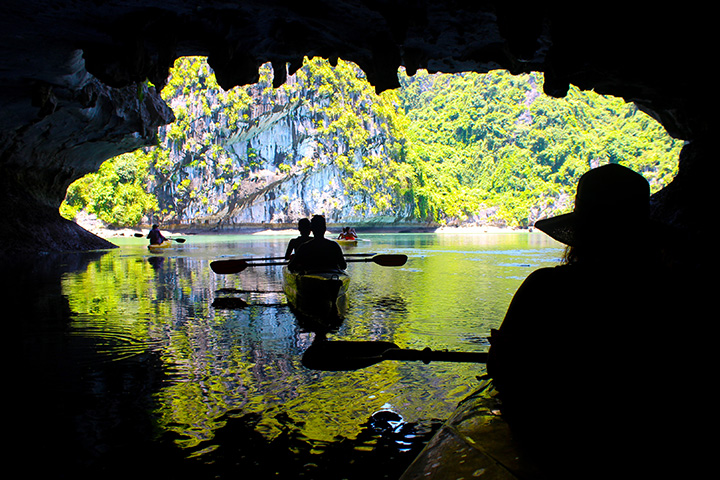 6) Stroll through the historic alleys of Hoi An, a UNESCO World Heritage Site

Hoi An is undoubtedly one of the cultural jewels of Vietnam and a must-visit when you travel to Vietnam. China, Japan and France all left a strong cultural and architectural influence there which can still be admired today. Indeed, this former small fishing village was a stopover for merchant ships from Europe and Asia, and thus welcomed travellers from different cultures. Today Hoi An has more than 800 buildings classified as historic monuments and is listed as a UNESCO World Heritage Site. The romantic charm of its city centre creates an enchanting atmosphere on every street corner, a delight for photographers!

It is also fun to cycle through the alleys and stroll through the tastefully decorated shops illuminated by myriads of colourful lanterns. The city is also famous for its culinary specialities such as "cao lau": noodles from the region with lots of herbs and tender and crispy pork. 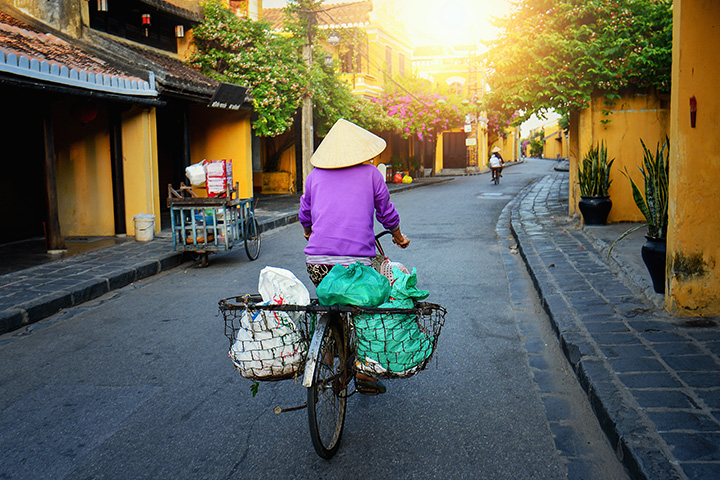 Take a detour to the territory of the White Thai ethnic group at Mai Chau, a valley with karst reliefs crossed by many rivers amidst landscapes of verdant green. The scenery is spectacular, especially when you immerse yourself in the life of the valley by spending the night in one of the many traditional houses on stilts. Here in Mai Chau, it is indeed possible to spend a night with the locals at a homestay where you can join in on the meals cooked by the whole family with local ingredients. Your hosts will be happy to welcome you, giving you a taste of locally fermented rice alcohol and demonstrating folk dances with a small musical group using traditional instruments.

Mai Chau is also the place where you can hike or cycle, and discover local crafts related to textiles and wickerwork. This is one of the best places to experience an immersive stay with the locals when you travel to Vietnam. 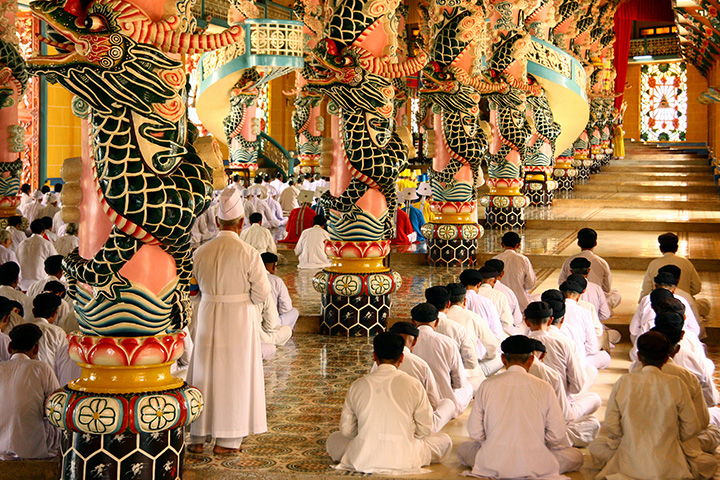 8) Bask on the most beautiful beaches of Vietnam

Who doesn’t want to take in a bit of sun, sea and sand on a holiday to Vietnam? The stunning beaches of Vietnam rival those of its neighbours. Mui Ne, near Phan Thiet, and Phu Quoc Island in the south of the country are examples of the beauty of the expanses of fine sand and emerald waters that can be found in Vietnam.

Mui Ne is a small village renowned for its palm trees and its sand dunes. Sailing enthusiasts can benefit from the strong winds that sweep this part of the coast and enjoy sporting in the water. The island of Phu Quoc on the other hand, is more focused on idleness and relaxation with its range of resorts and its varied and succulent seafood. 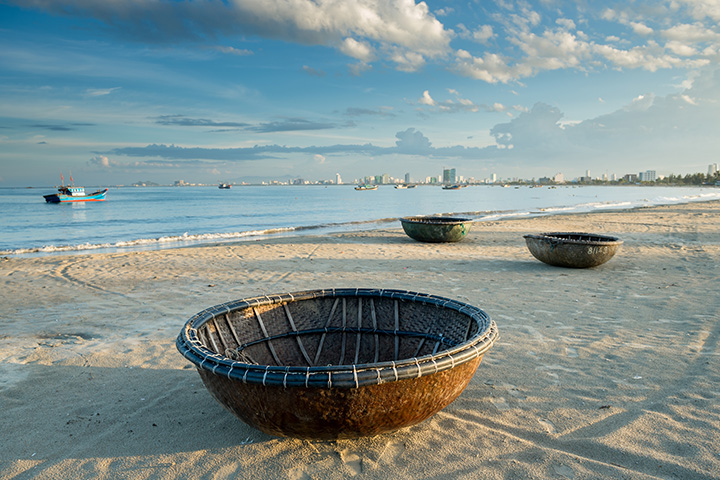 In Vietnam, the mythical Mekong River divides into 9 branches which then abundantly irrigate the south of the country, creating a prosperous delta which is often called "the rice granary of Vietnam".

This region, inhabited by millions of South Vietnamese, is made up of canals, rice fields and lush orchards where life is slow and relaxed. Every morning the vendors of the lively floating markets with their gentle frenzy call the crowds to buy their fresh produce all sourced from within the delta. From your sampan, start at dawn to follow the course of the peaceful life of the delta in the way of the inhabitants: on water. 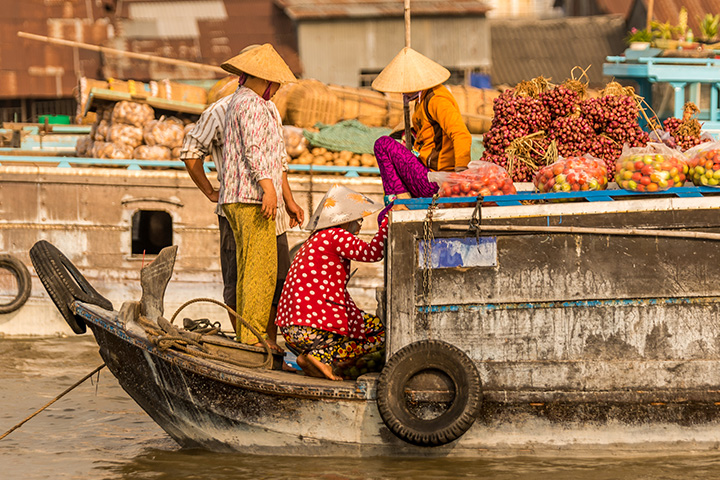 Formerly called Thang Long or "City of the Rising Dragon" when it was founded over 1000 years ago, today Hanoi is the capital of Vietnam. A city with irresistible charm, it is located at the crossroads of traditions and is home to an emerging modernity, dotted with lakes, shaded avenues and green parks.

In its center, Hoan Kiem Lake is the historic heart, where Asian and European influences mingle. North of this lake, you will have to pass through the 36 Streets District. It is an intertwining of streets, sometimes very narrow, where the swarming activity is made of shops listed by lane: for example the street "Hang Gai" is the silk street, or the street "Hang Bac" is that of silver. Venture out, get lost! And you will return to the soul of the capital. 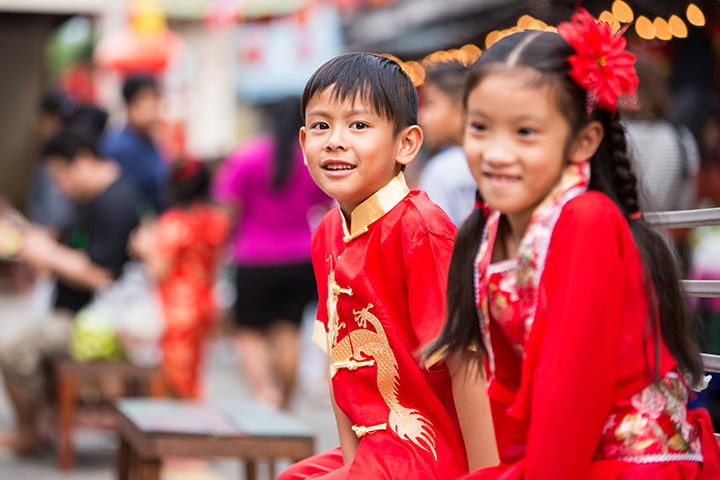